Passion and even intrigue are some of the words that come to mind when thinking of diamond engagement rings. There is no other explanation for someone to give their lover a $5,000 to as much as $20,000 diamond ring. Quite simply, men are driven by their passion for a particular woman to give her a diamond engagement ring when he proposes marriage to her. Not only are men and women passionate about their rings, the diamonds alone have been said to wake up romance since ancient times. 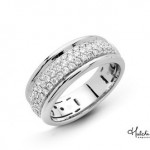 The origin of the word “diamond” is from the ancient Greek. Their word for diamond was “adamas” and its actual meaning was “unconquerable”. This seems appropriate since diamonds are supposed to be indestructible or to remain unconquered by any force.

Since the discovery of diamonds, they have been sought passionately. They have been fought over and worshiped. They have been stolen, traded and hoarded and even used to cast evil or love spells in nearly every culture. With such a history, one would think that this is the most complex stone on the earth. However, from a purely chemical point of view, it is actually the most simple and purest of all of the precious stones. Unlike other precious gems which have various impurities in them, diamond is only pure carbon. As a result it is technically, first cousin to your child’s pencil for school.

From time immemorial, people have given love tokens of one sort or another. Many of these deteriorate over time as we see when archaeologists dig up coffins or other repositories of ancient civilizations. Love token s can be made from many different materials but all of them erode, corrode or simply break through the decades and centuries. However, diamonds are the ideal love token since they will endure way past the owner. In fact they will look pretty much the same in 50 or even 500 years as they do today. A love token can be just about anything; a book, a picture, a charm or something else. But there is simply nothing however that compares to a diamond engagement ring. They can capture the heart and the imagination of lovers all over the world.

The Symbolism of Diamonds

Since ancient times diamonds were believed to make the wearer courageous as well as victorious over enemies. However, to counter all of this power, they were also supposed to symbolise modesty and innocence of the wearer.

The Biggest Ever – The Cullinan Diamond

Many people buy a diamond engagement ring up to around a one carat diamond. Some buy them with two, even three or four carats. However, the largest diamond ever discovered was the Cullinan Diamond which was found in South Africa, the largest producer of diamonds in the world. The stone was immense weighing in at 3,106 carats. Needless to say, this diamond was priceless. The stone was clearly too big for a ring or any other single piece of jewellery and it was carefully made into a number of smaller diamonds. The main part of the fabled Cullinan Diamond can be seen as part of the British Crown Jewels on display at the Tower of London.

The Dazzle of Diamonds Hollywood-style 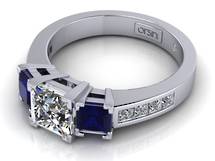 It is said that diamonds are a girl’s best friend and they are popular all over the world. As a result they are often designed and sold in the some of the most romantic places. This led onto romantic stories and films set in those same famous places. From Hollywood to New York to Paris, they have been on the scene of nearly every love story ever produced. Famous designers as well as movie stars and millionaires and even a few thieves have all bought, sold, stolen and traded diamonds for one reason alone, passion and even intrigue of true love.

While the glitz and glamour of Rome or Hollywood bring forth images of massive diamond rings, for the vast majority of people a more modest approach is the way forward. However, this does not mean that Auckland diamond engagement rings are not glamorous, chic or stylish. In fact some highly skilled jewellery designers in Auckland like Orsini Fine Jewellery have some outstanding rings. You can see some on their website. Click though to get an idea of the range of custom designed diamond engagement rings they offer or some of the top Italian rings made by people such as Marco Bicego for which they have sole distribution rights in NZ.